What British Food Is In Season For The Month Of August

While for many of townies August is the month of holidays, BBQ’s and family gatherings the country folks are working hard in the fields harvesting the British staples such as Wheat, Barley and Oats. Aside from these we also have lots of fruit and vegetables ripe and ready for picking, many which I have already seen in the farmers markets such as courgettes, aubergine, fennel, broccoli and beans, both french and runners. And I noticed too that the fishmonger is also selling samphire. You will see the first of the fresh nuts arriving on the scene this month too, so look out for cobnuts. There will also be game on the menu later in the month as the gamekeepers go out on the moors and hills shooting grouse. And if that wasn’t enough, the arrival of leeks, squashes, wild mushrooms, sweetcorn, tomatoes, apples, blackberries, pears and plums will be on the market too. I have already seen tomatoes, apples and small plums arriving at my local farmers market.

Common on the mediterranean, they seem to have done well this year in Britain with the exceptionally warm and humid summer that we have had, perfect conditions for Aubergines. Try to find outdoor grown Aubergines, as they tend to taste better than greenhouse ones. Aubergines are a great BBQ accompaniment, grill them on skewers with a mix of other vegetables, or add them in with tomatoes and courgettes for a tasty ratatouille. My favourite but rather naughty meal to make with them is moussaka, a Greek dish that is like lasagna but using aubergines instead of pasta sheets. 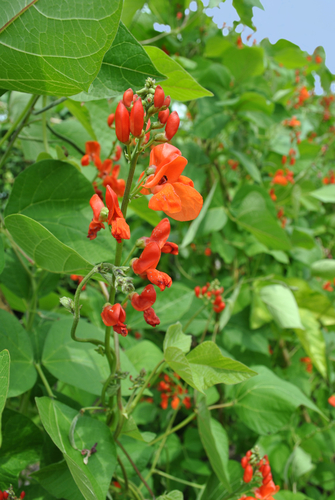 It can be difficult to find British grown French Beans (green beans / haricots verts) outside of farmers markets unless you grow your own. The ones in supermarkets are usually flown all the way from Kenya which is not only horrific for the environment but also not great for taste. Beans like peas decline very quickly after picking so make the most of the short season for British grown ones.

Runner beans are a bit more of a British staple and are slightly hardier than the French ones available throughout July and August. If you are growing them they display an abundance of often red coloured flowers, very pretty indeed. Despite them usually being available when they are long and stringy, if you can catch them at 6 inches or less I am told they are much tastier and without the stringy effect.

The Calabrese variety of broccoli is now in season although it does tend to be overshadowed by it’s more glamorous relative the spring purple sprouting broccoli and the very pretty Romanesco variety available in the autumn. We should however not overlook the Calabrese variety, I think it is equally as tasty and it still packs the punch when it come to nutrition, loaded with vitamins, antioxidants and cancer fighting compounds. The trick is not to lose all that goodness in the cooking. Add raw florets to salads or lightly steam for around 2-3 mins to retain as much of the nutrients as possible. I was rather annoyed to learn that steaming in the microwave for two mins also ruined them nutrient wise. Broccoli also makes a great addition to pasta dishes or stir frys. While the florets are the best part of a tree don’t throw away the stalks, they too can be eaten and taste just fine. Cut the stalks up into small pieces and steam or cook with the rest of the florets. Stalks are also great if you’re making up a stock in which case they can be left whole.

I had never even hear of cobnuts until recently, they are mainly grown in Kent, Worcestershire, Devon and Sussex and rarely distributed beyond the counties in which they are grown. The production of cobnuts dramatically declined in the twentieth century due to the intensive labour required to maintain the orchards, however with renewed interest in all things old and British of late we may well see them re-appearing again. They sound delicious said to have a crunchy texture with a milky flavour which develops through the season which lasts through October. I will definitely be making some enquiries at my local farmers market for some resources to try them.

Essentially a small marrow, courgettes are far tastier than actual full sized marrows which tend to be very bland and only really grown by competition entrants where it’s all about size and nothing to do with taste. I have been seeing courgettes at my local farmers market since late July but their season peak is in August before they quickly fade away as Autumn moves in and squashes takes over. This year I have had the opportunity to try some very small yellow courgettes which are lovely chopped up raw in a salad. There are lots of varieties of courgettes in green, white and yellow colours and all kinds of shapes from rounded squashed ones such as ‘patty pans’ and ‘summer crook necks’ which have a fat rounded bottom with a curved neck. I had no idea there were so many different varieties, that’s just one of the many great things about shopping at farmers markets, my eyes have been opened wide. There are all kind of things you can do with courgettes which ever variety you choose, they are lovely raw or roasted / grilled with a little olive oil, on their own or in a dish such a ratatouille. I enjoy them grilled with a little olive oil and wholegrain mustard. Cheese is also a great accompaniment for courgettes, and they also make for tasty tempura.

Fennel is a vegetable I had never really paid much attention too due to my dislike of aniseed, mainly after eating aniseed hard boiled sweets as a child. However I have come to enjoy the more subtle and natural flavours of aniseed present in that of tarragon and fennel. For lunch today I made a lovely Jamie Oliver recipe involving fennel which was sliced thinly and added raw to a salad of lemon flavoured bulgar wheat, black olives, parsley, mint, quails eggs and harissa smothered sardine fillets. (the recipe called for salmon but I substituted for sardines since that was what I had in the fridge) The salad was seasoned with crushed roasted cumin seed and pistachio sea salt. Delicious! The season for fennel lasts from July through to the autumn. Once again done through away the stalks and fronds, fronds can be scattered over a salad, or use them to make stock.

Another great accompaniment to fish as well as with being paired with fennel, Samphire has a fine salty flavour with a succulent texture. Simply blanch or boil for a short time as you would with asparagus. It is the marsh variety which is mainly sold today as opposed to the rock kind which is somewhat rare and very difficult and even dangerous to harvest. It’s best eaten fresh and doesn’t keep very well unless pickled. It does tend to be quite expensive to buy so if you’re on a budget head for the Norfolk coast and pick your own. As with all forgeging, please be mindful of the environment and don’t pick too much as the little cactus like plants can be homes for little sea creatures and food for birds in the winter. It is said the best Samphire is covered by every tide and at it’s most tender during the earlier part of the season.