This week I had the pleasure of attending the opening celebration night at Darbaar Restaurant by invitation of KK Communications. Darbaar is a new restaurant located in the city of London serving modern Indian cuisine brought to you by chef Abdul Yaseen. And who better to take along with me to judge the fare than my Indian friend Bijal.

To give you some background; Chef Abdul Yaseen from Jairpur has put the last 15 years living in the UK to good use, building the well known and respected brand Cinnamon Club and Cinnamon Kitchen and Anise. To his credit Abdul has won the British BBQ Championships and the Canapé Cup at Square Meal Venues & Events three years consecutively. Now following his lifelong dream Abdul has final opened his very own restaurant. Darbaar brings the English capital a mix of culinary influences from all over India with a modern twist, setting high standards when it comes to sourcing ingredients that make the most of seasonal produce. It’s a great food concept that appeals to a broad audience, rather different to the traditional curry houses many of us are familiar with. In this style I believe it makes Indian food more appealing to a wider audience and that people might be more likely to try something new.

On arrival at the restaurant, Bijal and I were greeted with a Darbaar special Prosecco based cocktail and invited to try an array of delicious finger food. Our favourites were the lightly spiced Paneer which must have been made fresh in house because it was the softest Paneer cheese I’ve ever had the pleasure of eating. Bi’ said that she would have liked the flavouring to be a little stronger but agreed the texture was first class.

I loved the Poached Salmon cooked to perfection, a difficult thing to achieve for a big party of people. It was delicately soft in texture with a kick of freshness brought about by the herby dressing. Bi’ ate many of the Chicken Lollipops with various dips so she must have thought well of them, as was the‎ Khaman Dhokla – a savoury yellow sponge made with Gram flour lightly spiced and steamed. In India Khaman Dhokla is typically served as a brunch or snack. Bi was very surprised to see it there, and it was a big hit with both of us! 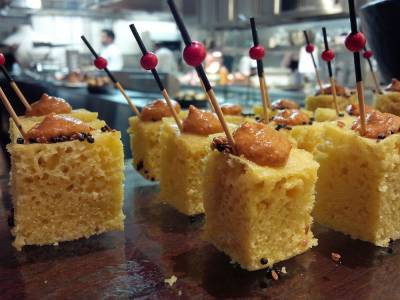 The Gulab Jamun dessert was divine! I’ve never really been impressed with Indian desserts, Bi informed me that desserts are not a common thing to have in an Indian home, so perhaps that’s why there is never a big focus on them in Indian restaurants. These little treats however were quite moreish, little dough balls fried and soaked in sugar syrup spiced with cardamom, saffron and pistachio. A special occasion dessert, so very fitting for the opening of such a wonderful restaurant inspired by Royal Indian banquets.

“My vision of ‘Darbaar’ is to re-create memories where my diners will love to host their tables and encourage sharing the food which once was the charm of the royal courts.” says Abdul “Love for food has shaped the course of my life, taking me on a fascinating journey from India to the UK where I have spent over a decade promoting modern Indian cuisine to London restaurant-goers. Now I’m delighted to offer ‘Darbaar’ to the capital and I look forward to giving you a royal welcome soon.”

Aside from the delicious food the restaurant offers a cocktail bar where light bites can be enjoyed, a 120 cover dining room with a full view of the open kitchen, a private dining room, and chef’s table. Nanu Design have done an incredible job creating a warm and inviting space that is chic and luxurious, but I think it was the textured sparkly copper coloured wallpaper that really impressed me in the decor, alongside the futuristic bathrooms dispensing Sea Kelp hand soap and moisturiser.

The restaurant is conveniently located for city workers just a five minute walk from Liverpool Street and Shoredich stations. For more information or to make a booking check out their website: www.darbaarrestaurants.com

Apologies for the quality of the photos, just wee snaps taken on my phone at the event.