Capture the moment with professional photography

I had the pleasure of joining Fabio Adler of Mousseux Anglais for one of their tasting sessions held at the swish Mayfair restaurant Sake no Hana. Photographing this fantastic event in the low lit ambient room was a challenge. Initial experiments using an on camera flash resulted in unpleasant shadows and washed out the ambience. In addition the flash was disturbing the guests enjoyment of the evening. The best solution to photograph this event was to push the ISO levels right up on the camera and open up the iris as much as possible by setting a low F/Stop. It’s always a tricky balance to achieve enough depth of field while gaining a fast enough shutter speed to avoid too much blur from motion and camera shake. This way I was able to capture guests tasting English Sparkling Wine for the first time, capturing their reactions and the host, Fabio Adler, educating and celebrating this wonderful heritage. 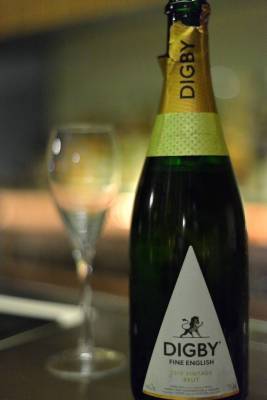 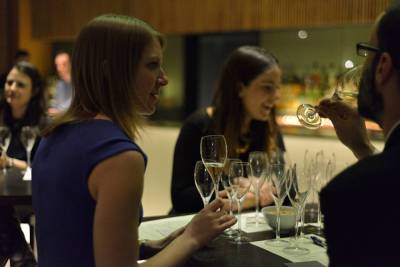 Since 1977 there has been a revival for British Wine. The three key figures behind this revival are Ray Brock, Edwards Hyams and George Ordish. If you decide to learn more about British wines and winemaking you will find their names cropping up quite a lot. British wine in general has not had the best reputation by comparison. However things are changing. Particularly in English sparkling wine.

While for British consumers this home grown product might still be flying a little under the radar, many restaurants, bars and hotels are picking up on this developing British product. There are growing numbers of wine lists embracing English sparkling wine across the country. For example the restaurant Isaac located in Brighton have an all British drinks menu including English still and sparkling wines. Where our continental wine making neighbours once scoffed at the idea of English wine, they are now starting to take notice at the growing popularity of it.

When in new territory it can be difficult to know which wines to select. That’s one of the great advantages of attending a tasting evening like the one organised by director Fabio Adler of Mousseux Anglais. They hold a sparkling wine tasting event every month in various locations across central London. 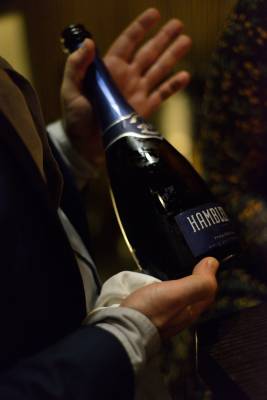 We tried four different brands of sparkling English wine. Here is the list in order of my own personal preference.

This is a very dry sparkling wine that is long and complex. It has a rich and warm nose exuding Seville orange and brioche aromas with hints of flowers and toasted hazelnuts. The bottle is priced at £42.50

This English sparkling had delightful perfumed and creamy notes. The palate is well balanced with some crunchy apple to crisp the buttery character. It really was a close 2nd place for me.  Priced at a bargain £27

Served on arrival, this very pleasant sparkling wine was zesty, fragrant and fresh. Apple and crunchy orchard fruits come to the fore on a wave of fine bubbles, brimming with vibrancy and depth. I found this one quite sharp but still very enjoyable. The bottle is priced at £39.99

Sadly the least favourite for myself and much of the group. While the taste seemed sweeter than the Digby, it actually contained significantly less sugar. It contained quite a strong yeasty nose with some of that being carried over into the taste. This I believe lead to its lack in popularity. It is described to have aromas of brioche and toast yield to ripe stone fruit and subtle toasty notes. The bottle is priced at £21

From the group I would say there was a split in top place preference between the Hamledon versus the Breaky Bottom. I would certainly buy either of the bottles, perhaps saving the Hambledon for more special occasions.

In addition to discovering English still and sparkling wine in restaurants and hotels, English sparkling wine can be purchased directly from the vineyards. A small selection can now also be found in supermarkets. Waitrose in particular has been a big supporter and offers the best choice for consumers. Marks and Spencer’s also stock a reasonable range and some bottles can also be found in Sainsbury’s.

I asked Fabio for his recommendation on vineyards to visit in the UK. Of the vineyards he himself has visited he recommended:

I for one will certainly be seeking out more English sparkling wine to drink in the future and I hope this article will inspire you to give them a try too.

If you want to use the photo it would also be good to check with the artist beforehand in case it is subject to copyright. Best wishes. Aaren Reggis Sela

All images on this website are copyrighted to and owned by Rhowena MacCuish.

You are my breathing in, I have few web logs and often run out from to post . Carmelia Karoly Silvia

You made certain nice points there. I did a search on the topic and found most folks will have the same opinion with your blog. Sibel Scot Phi

You certainly know how to bring a problem to light and make it important. More people should read this and understand this side of yourstory. Linette Nathan Sheridan

Hello mates, its wonderful article on the topic of tutoringand fully defined, keep it up all the time. Nathalia Rory Mroz

Thank for your writting! I have read through some similar topics! However, your article gave me a very special impression, unlike other articles. I hope you continue to have valuable articles like this or more to share with everyone!

Thank you for the kind words. I’m glad you found the article interesting.